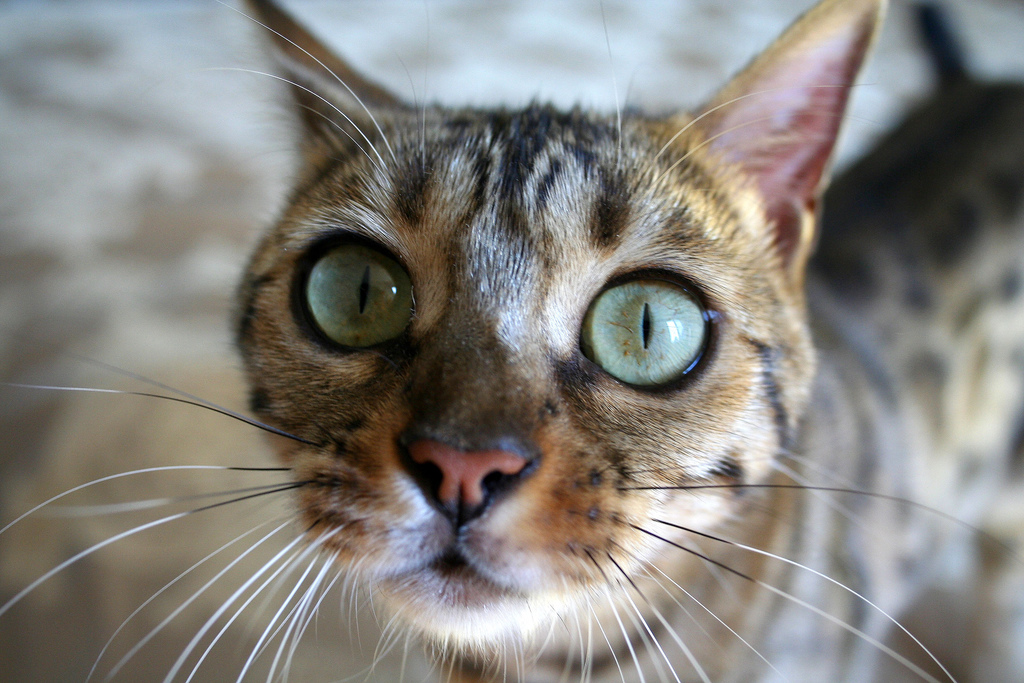 A beautiful, sleek and athletic breed, the Bengal cat is like something straight out of the jungle. Talkative and with a cheeky character, what else should you know about our spotted friend?

The Bengal Cat In Brief

Despite its wild appearance the Bengal is very much a domestic variety. The wild ancestor of the Bengal is the Asian Leopard Cat which also give us its name, from the taxonomic name Prionailurus bengalensis bengalensis.

Although the Asian Leopard Cat is an ancestor it’s not a particularly close one. In order to produce the first Bengals, the original hybrids were crossed and back-crossed multiple times and were separated by four generations from their wild ancestor.

The Bengal as a modern breed really took shape in the 1970s when Dr Willard Canterwall began breeding Asian Leopard Cats with domestic cats in order to study their apparent immunity to feline leukemia virus. When Canterwall became ill these hybrids were cared for by Jean Sugden Mills who played a pivotal role in getting the breed recognized. Despite this they remain a controversial breed and not all registries recognize it, primarily because of the acknowledged wild ancestor.

What’s the Temperament of a Bengal Cat?

It has to be said that Bengals are not low maintenance cats. They are naturally curious and possess a high degree of intelligence so you should be prepared for lots of play. They love attention and will often follow you around the house just to see what you’re doing.

Bengals are sleek, elegant and highly athletic cats with great balance and an impressive aptitude for jumping and climbing. They’re relatively large cats and will happily play dog-like games such as fetch.

They tend to have confident and forceful personalities. A Bengal will not sit idly by waiting for you to look his way. He’ll actively seek your company and place himself between you and whatever you’re doing until he’s satisfied.

They aren’t afraid of water and will often follow you into the shower or investigate a bathtub. So it should go without saying that you probably don’t want to leave a fish pond or aquarium within easy reach of their nimble and agile paws.

A Quick Look at the Bengal Cat in Action

The Bengal is one of the more talkative breed with an insistent chirrupping miaow. Just listen to this mother as she calls to her kitten.

In early life Bengals are generally healthy, however like most breeds, especially pedigrees, there can be a predisposition to certain conditions. These aren’t found in all cats of course but it’s something to be aware of. The Bengal can be prone to the following:

This is a fairly common heart condition observed in many older Bengals where the heart actually thickens causing it to work harder. Ultimately this can lead to serious complications such as thrombosis or clotting which can cause paralysis in the back legs. You should look out for warning signs such as tiredness and panting.

This can occur in Bengals old and young and results in the gradual deterioration of the cat’s vision until it’s blind. There’s no test for this and the problem gene can be present in a cat without symptoms so it’s almost impossible to know if your cat might develop it.

Bengals are particularly prone to allergies to common anesthetics. Your vet should be aware of this but it would be worth mentioning anyway as many vets won’t have had to treat a Bengal before.

This is when the kneecap is thrown out of alignment with the joint resulting in pain and discomfort. The only way to fix this is through surgery which introduces the possibility of an anesthetic allergy. To reduce the chances of this condition you should aim to keep your Bengal at a reasonable weight as obesity is a contributory factor.

The Bengal has a short and dense coat that’s a joy to stroke as well as being relatively maintenance-free. You should only have to give your Bengal a periodic brush, perhaps once per week, in order to remove any dead or loose hair and exfoliate the skin. You shouldn’t have to bathe your Bengal.

As with most cats, it would be beneficial to brush the teeth on a weekly basis or more frequently but this is often impractical.

Bengals love the outdoors and will climb and explore their surroundings with enthusiasm. They’re bold and vocal cats that show little fear, and they’re known to ignore the conventions of territorial marking by the other neighborhood felines. To avoid conflict only let your Bengal explore where you know they won’t run into many other cats.

You may want to consider keeping your Bengal as an indoor cat. They can adapt well to this but require a lot of stimulation and attention. Bengals are intelligent animals so puzzle toys work well alongside feather teasers to stimulate the hunting instincts and provide physical play.

Bengals love to climb and are excellent leapers. A sturdy cat tree would be a wise investment to keep your cat happy. The kind with holes and many different platforms would work especially well

The Cost of a Bengal Cat

Bengal cats have a wide variety of prices generally between $500 and $2000 but they can go for much lower or higher than that based on age and quality. A cat that’s 2 years old or more and not of a high quality might go for $75 to $200 while the best kittens might net a breeder anything from $2000 to $4000. Always buy from respected dealers and ask as many questions as you feel you need to.

Tiny Kitten Can’t Bear To Leave Officer Who Saved Him