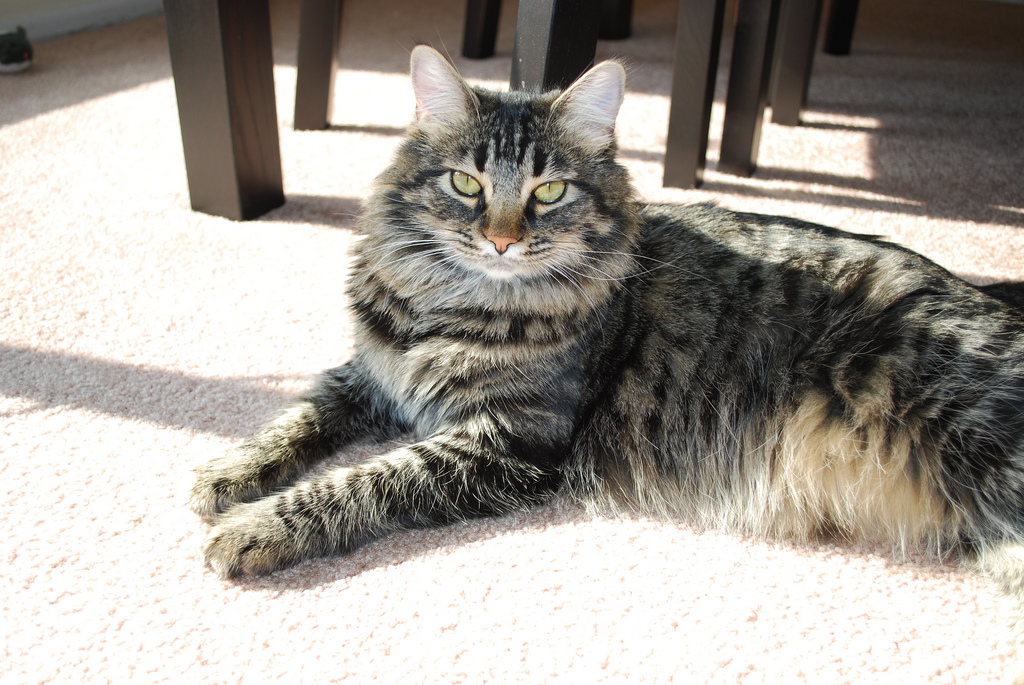 The Maine Coon is fierce-looking and you might expect an aggressive temperament from this New England native. But nothing could be further from the truth. Let’s find out what else you need to know about this beautiful domestic cat.

The origins of the Maine Coon are shrouded in mystery. As the name suggests, it’s thought that they have their roots in Maine, New England. It seems that they were very popular farm cats favored by the early settlers due to their excellent hunting skills. One story goes that they are the descendants of Marie Antoinette’s Turkish Angora cats that made it all the way to Wiscasset, Maine on Captain Samuel Clough’s ship after an ill-fated rescue attempt.

There’s also a theory that they’re the descendants of the long-haired cats that resided aboard the vessel of Captain Charles Coon, an English sea captain. This is probably as close to the truth as we’re going to get. It’s generally accepted that the breed developed as a result of interbreeding between local short-haired varieties and long-haired breeds brought to North America from Europe. It’s closest relative is the Norwegian Forest Cat and there are even suggestions that some of the breeds from which the Maine Coon evolved were brought over in the 11th century by the vikings.

One story we can definitely discount is that the distinctive appearance is a result of an interbreeding between a local cat and a raccoon. While that’s obviously untrue, this hoary old tale is how the breed came by its name. While we refer to all examples by the name Maine Coon today, it wasn’t always the case. If the cat didn’t have the brown tabby coat it was referred to as a Maine Shag.

The Maine Coon is among the largest of all domestic breeds. They can weigh anything up to 18lbs with some specimens growing even larger. It’s generally a long-haired breed although some examples could be considered to have a medium length coat. They are broad-chested and large limbed with a muscular physique. The paws are large with fluffy toes that make it easier for the cat to walk on snow. The Maine Coon’s coat is perfectly adapted for survival in the harsh climate of Maine. The coat is long and water-resistant on top with a dense, fluffy layer underneath. The shaggy underside acts as perfect insulation against ice and snow and the thick, bushy tail can be wrapped around the face to give added protection against the wind.

The Maine Coon is very much a people cat. They have a very sweet nature that makes them ideal pets. Always happy to receive your attention, the Maine Coon isn’t necessarily a needy breed. Of course they won’t refuse a stroke or a cuddle, but they’re not really the sort of cat to insert themselves in the middle of whatever you’re doing. They’re usually happy to observe with only the occasional bit of interaction.

As we mentioned above, the Maine Coon is a terrific mouser and even in a modern urban setting  this characteristic still shines through. Mice will quake in fear when there’s a Maine Coon in the area. If your Maine Coon is more of a house cat you’ll need to keep him occupied with a selection of cat toys. Feather toys that allow them to practice stalking are a good choice but, as with most cats, you’ll find that they play with just about anything. They’re also fond of playing fetch and will chase after a ball when thrown.

Play is important to the Maine Coon. Like their Siberian cousins they retain a kittenish sense of fun well into adulthood. This leads to some hilarious antics during playtime. Just don’t let them get too boisterous. You don’t want to be on the end of one of those huge paws.

Maine Coons are excellent climbers and incredibly agile. This is even more remarkable when you consider the breed’s large build and thick coat. They can scale fences and trees as gracefully as any smaller breed and they’re surprisingly fleet-footed.

This breed has a very distinctive voice which it uses to manipulate its human companion. They deliver requests for attention, whether it’s for food or a cuddle, in a soft chirrup which belies the size and impressiveness of the cat. Certainly not the ferocious noise you might expect from this large feline.

What are the Exercise Needs of a Maine Coon?

The Maine Coon is a very athletic and playful breed with bags of energy. They’re naturally active and need plenty of regular exercise. If your Maine Coon has access to the outdoors this will take care of itself as the Maine Coon is a an instinctive and accomplished hunter. As a house cat, however, you’ll need to take a more active role in your pet’s exercise regimen. This can take a variety of forms.

We can’t say it enough: Maine Coons absolutely love to play. You’re going to need a good supply of toys to keep him occupied. I say “a good supply” because those big paws will make short work of most feather toys. So buy good quality. They are excellent climbers and absolutely love cat trees. The kind that has places to hide and multiple surfaces will be best, giving your cat a variety of options.

Maine Coons have a lot of dog-like attributes. Strange as it may seem, they can adapt very well to walking on a leash just as a dog would. It may be a little difficult at first, but once your Maine Coone housecat starts associating the leash and harness with the outdoors they’ll get excited in the same way a dog does.

A gentle warning: neglect your Maine Coon’s exercise needs at your peril. Should you fail to offer your cat enough stimulation they may take it out on your property. Perhaps a favorite shoe or slipper.

Is Training a Maine Coon Easy?

The Maine Coon is a naturally smart and alert breed and it has a fantastic capacity for learning. If you try to teach your Maine Coon some tricks or behaviors they’ll pick them up fast. Contrary to the traditional view of cats as being stubborn and free-willed, Maine Coons will turn your attempts to train them into a game.

They’re incredibly able hunters, so if you’re trying to teach a new behavior try incorporating it into some of those pre-existing hunting instincts. For example, they will happily play fetch so you can try to teach them to drop and sit by offering a treat. Modulate your tone to emphasize the desired behavior.

Although Maine Coons can be dog-like, bear in mind that they’re still cats and therefore still possessed of that same willful temperament that all cats have. You may find your cat unwilling to cooperate. So when they eventually comply make sure you have that reward on hand. This will help your cat to associate the command with the behavior and the behavior with the reward.

Lastly, make it fun. Your cat will only do something if they feel like it and no amount of cajoling and coaxing will convince them otherwise. Refrain from shouting or making sudden movements that might distress or alienate your cat. Underneath that cool exterior they have feelings too.

A Look At The Maine Coon In Action

Their coats are similar Siberian cats’ so the same advice applies. The amount of grooming your cat requires depends on whether they’re spending lots of times outdoors in harsh weather. Maine Coons have a long outer layer to their coat and a thicker softer layer underneath. The outer layer is naturally oily and waterproof and this helps to prevent matting from occurring.

For indoor cats I would recommend some light brushing once or twice a week with a soft brush. This is partly to keep the coat in tip top condition but it’s also something that most cats enjoy and will help you to bond with your furry friend. For outdoor cats you may need to up the level of grooming and use a stiffer brush to ensure matting doesn’t occur.

I wouldn’t recommend bathing your Maine Coon unless they somehow get particularly filthy. Bathing, especially if you use any sort of soap, will strip the coat of its natural oils and may result in feline dandruff and irritation.

The Cost of a Maine Coon

Maine Coon kittens can cost anywhere from $400 to $1000. The exact amount will depend on the quality of the cat and the color and patternation. A more classic Maine Coon appearance will command a higher price. Older cats may cost less and you may even find one at a rescue center. If you’re buying your cat you must always make sure that you buy from a reputable breeder.

Cat Found In Backpack Loves Rescuers After They Saved His Life