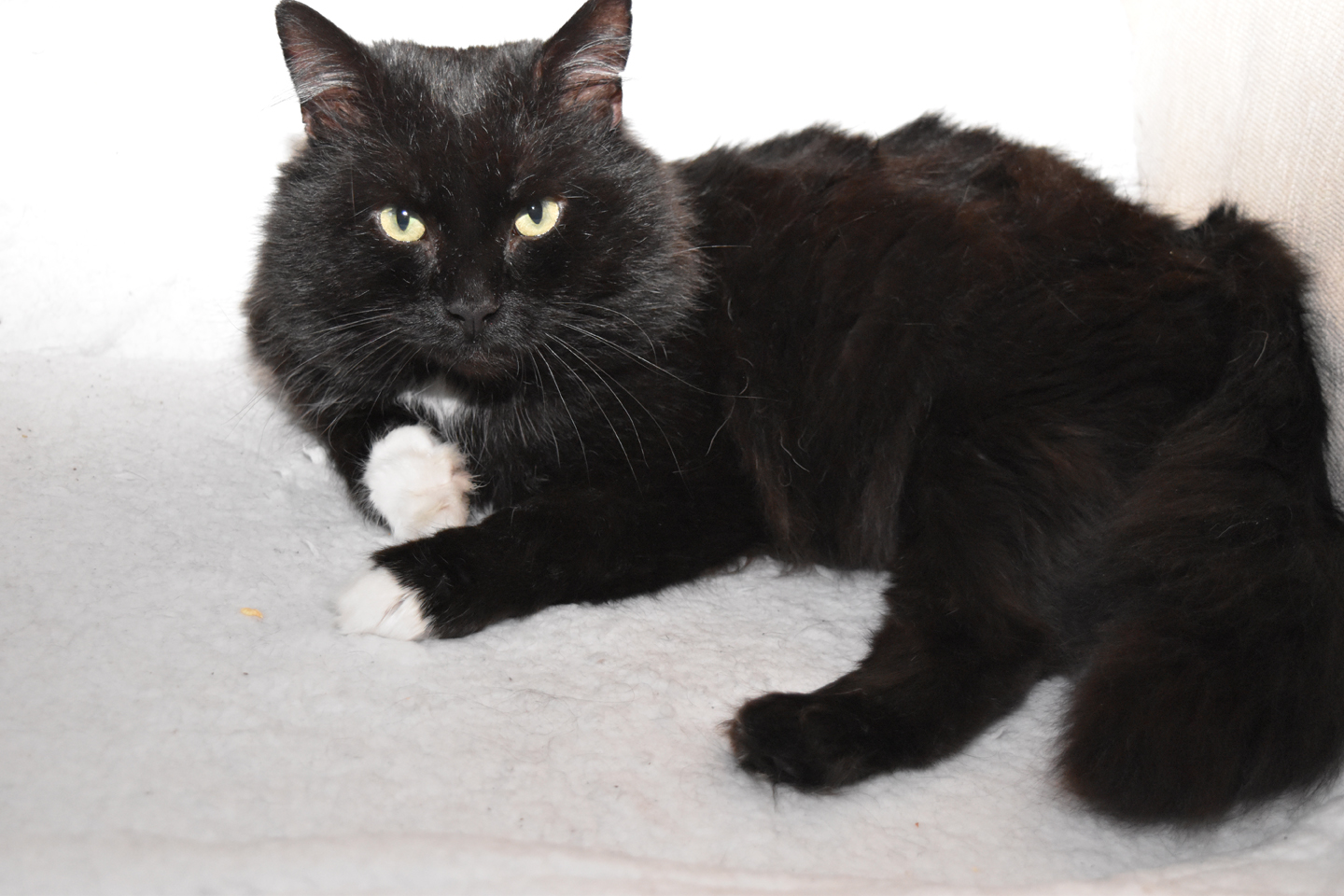 If you’re a cat person and you’ve looked at social media today at some point, it can’t have escaped your attention that we’re celebrating Black Cat Day. I have to be completely honest here: I was unaware of Black Cat Day until I saw it trending on Twitter a little while ago. It’s not that I’ve been remiss in my black cat appreciation. Quite the opposite in fact: it had never actually occurred to me that black cats were in need of such targeted marketing and awareness. They’ve always been my favorite and I can’t conceive that they’d be less desirable than other varieties of cat. So why do we need Black Cat Day?

There are a number of reasons that black cats take longer to rehome and are put to sleep more often than any other type of cat. We may live in a modern world but it seems that we can’t quite escape the deep rooted cultural superstitions of the past. Most people would be able to tell you that smashing a mirror brings 7 years of bad luck. Whether or not we believe in the concept of luck or the power of smashed mirrors, we tend to be careful about breaking them. And in a similar way the superstition surrounding black cats hinders their adoption prospects.

But wait. I was under the impression that black cats brought good luck. What gives? It seems that the “black cats bring bad luck” trope is not a universal one. I’m writing this in Scotland where the arrival of a strange black cat in your home is a sign of prosperity. The rest of the UK and Japan consider black cats to bring good luck in a more general sense.

Throughout the rest of Europe however it’s a slightly more complicated story. In fact in most of Western culture black cats have long been considered to be the familiars of witches and a black cat crossing your path could be an omen of your impending death. Typically the Germans have many rules when it comes to black cats and luck: if it crosses your path from right to left it’s bad luck; from left to right it’s good luck.

Seamen are a historically superstitious bunch and they were no different when it came to choosing the ship’s cat. They would often choose a black cat for this purpose as it was considered to be good luck. Conversely, if a black cat walks onto the ship and then straight back off, that ship would sink on its next voyage.

So what have we learned from all of that? Superstition is a powerful thing but perhaps not as powerful as popular culture. The complexity of competing superstitions doesn’t account for the black cat’s unpopularity. Many of the superstitions described above have faded into obscurity over time and we’re only left with a few remnants. In popular culture black cats are bad luck. Black cats ride on broomsticks beside witches.

Vanity and the Selfie Generation

Superstition and deeply established cultural associations can only be part of the problem though. Black cats are 50% less likely to be adopted than their gray counterparts and in some places they account for 70% of abandoned cats. That can’t entirely be the fault of witches and suspicious sailors. So what are the other factors?

In the UK the RSPCA think they know why. They suggest that black cats struggle to be noticed in among cats that have unusual markings. Many rehoming centers post photographs of their cats online and they suggest that it’s very easy to scroll past a bunch of seemingly indistinguishable black cats to a more interesting looking breed.

This leads us nicely onto the topic of feline photography. It has also been suggested that in the age of the selfie, cats that photograph well are favored over those with less interesting features. A quick scroll through Instagram reveals thousands of expertly photographed Russian Blues, Scottish Folds and Maine Coons alongside a bunch of other desirable breeds. Of course there are black cats as well but the “stars” of social media tend to be highly sought after blues, grays and various long-haired varieties. Sadly it seems human vanity results in low adoption rates for black cats.

We’re a pretty new website that only launched about a month ago. When I created our logo it simply had to be a black cat. Why? Well mostly because of this little guy:

We adopted Andrew from the Balerno branch of the Scottish SPCA in November 2015. We first saw him on their website a couple of months before that and just sort of presumed he’d be snapped up in a heartbeat. His profile photo on the site was so adorable and it just seemed obvious that he’d be long gone by the time we got round to doing anything about it. 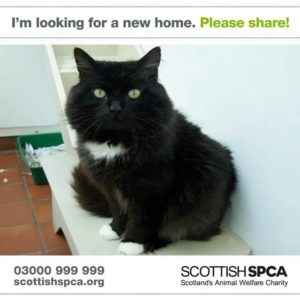 But the description that accompanied his picture revealed that he’d been found straying with matted fur and was very wary of strangers. He was looking for someone who would take the time to “build a special bond with him” according to the SSPCA.

He’d been in the shelter for 6 months when we arrived to see him. And it’s true: all around him where these playful little cats that would offer instant gratification to their adoptive owners. By contrast, Andrew was at the back of his pen, eyeing us warily and looking very grumpy.

We were told that we should approach Andrew side on, that we shouldn’t make any sudden movements and that it would be a bad idea to look him right in the eye. It felt kind of like we were being led into the lion’s den. And so the door to his pen was opened and we shuffled inside. The black cat approached. Andrew, it seemed, would like to be stroked please. Good stroking. More stroking please. Too much stroking and BAM. A solid whack from a chunky little paw drew blood from a small scratch on my hand. It was obvious why he’d been here a while: he was scared and would lash out when strange people entered his space and backed him into a corner. The bloody hand didn’t matter. We had to have him.

A year on and this little guy is the most affectionate of cats. He loves his food and exploring the back lanes and undergrowth around our house. He’s thriving and has a personality you could never have imagined from that sullen and unhappy cat back in the shelter. He’s just one black cat of millions who, more than the adorable rescue kittens or $500 pedigree breeds, need a safe and secure home. If you’re considering a cat adoption don’t overlook the quiet little black cat. You might just end up with an Andrew.