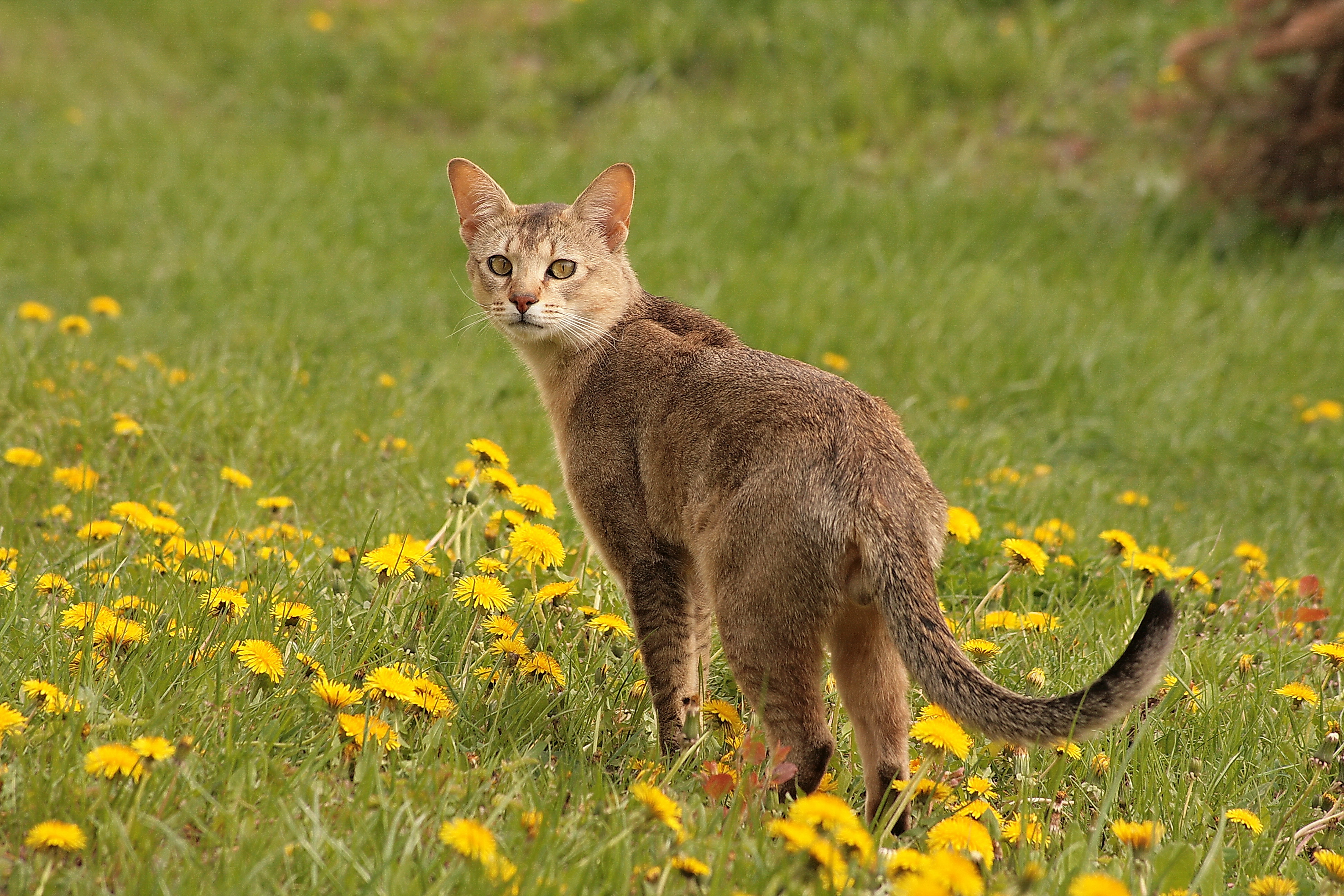 One of the largest domestic cats, the Chausie, a nondomestic hybrid source breed, is a mix of jungle cat and domestic cat. If you ever wanted a cat that your friends might actually mistake for a wild cat, the Chausie is your creature. With its regal appearance, reminiscent of something you might find in the tombs of Egyptian pyramids, the Chausie demands your attention.

An Overview of the Chausie

The Chausie (pronounced “chow-see”) is truly part of the wild. Its ancestor, the nondomestic jungle cat, originally came from the swamps of south central Asia. However, a small population of these cats was traced back to the Nile Delta in North Africa. In the 1990s, breeders started crossbreeding jungle cats with Abyssinians to create a hybrid cat that looked part ancient, part wild. These cats are similar to other mixed breeds like the Bengal and Savannah cats.

The tall, long and lean bodies of the Chausie, as well as their wide-set tall ears, make them look like pets of pharaohs. For the devoted group of original Chausie breeders, it was a long road to get the Chausie officially approved as a Championship Breed by TICA, but the Chausie was finally added to the list in 2013. The decision for the name itself shows just how close this cat is to the wild. Chausie comes from the Latin name for the jungle cat, f. chaus.

This cat is purposely bred to be medium to large in size, making it look even more like a wildcat. Most of the Chausies are slightly smaller than a male Maine Coon, but they are larger than Siamese cats. The adult male can weigh up to 30 lbs. The females, though, can weigh as little as 7 lbs. A cougar-like snout is another interesting feature to accompany the Egyptian-like body and wide-set ears. Chausies also have incredibly defined cheekbones, that type that models would envy.

Above the cheekbones rest eyes that are shaped rather differently than other cats: the top part of the eye is flattened across the top and the bottom part is a half oval. This heavy-lidded creature also has a deep chest, deeper than most other domestic cats, which help the Chausie breathe deeper, contributing to their seemingly endless energy. These cats come in three colors: brown-ticked tabby, solid back, and grizzle-tabby. Chausies exude athleticism and wisdom, perhaps a wisdom that has trickled down through thousands of years.

What is the Temperament of a Chausie?

Chausies come from wild jungle ancestors and are known to possess a forward, sometimes aggressive wild cat personality. However, this breed is four generations removed from the wild, making it fully domestic. Chausies are actually highly social cats that love interacting with humans. It should be noted that these cats are not necessarily the best fit for homes with small children and many delicate objects. While the Chausie is very loving with adults, the same can’t always be said for smaller children. With bigger humans, however, these are large cats that love socializing, playing, and interacting. With this in mind you should keep all delicate objects and valuables out of the way when your Chausie is in the mood to play.

How do I Train this Egyptian-Looking Cat?

The Chausie tends to develop deep bonds with its owners, and this love extends into the realm of training and exploring. You can train the Chausie to fetch and walk on a leash, as well as swim in water. Water doesn’t seem to faze this cat. Perhaps the Asian swamps or Nile Delta of its DNA encourage the Chausie to venture out of its comfort zone. This cat is quite intelligent, and it knows it. Call the Chausie a diva because this cat does like to be the center of attention, and it demands a certain amount of playing and entertainment each day.

A Look at the Chausie in Action

What Should I Know About Grooming, Health and Diet?

Because of the short coat of this breed, the Chausie requires very minimal grooming. Weekly brushing suffices for this active breed. What does take more time, however, is the care that Chausies require regarding their diet. The Chausie is generally a healthy cat, but there’s one small caveat: this cat eats gluten-free. Many non domestic hybrid breeds have a shorter intestinal tract than other domestic cats. This leads to difficulty breaking down certain types of plant-based ingredients, including cereal, vegetables, spices and herbs.

Chronic IBS and inflammation of the intestines is common among these cats if their diet is not properly attended. When you talk to the vet, you can find certain types of high-quality cat foods that have minimal plant ingredients. Some Chausie owners go straight for the gourmet “Catkins” diet: meat, meat, meat. However, meat alone does not contain all of the nutrients that this active cat needs. It is not a wild cat, but domestic. So talking to your pet’s doctor will be key in figuring out how to help this diva keep her stomach in check.

How Much Does a Chausie Cost?

The average cost of a Chausie cat has a huge range. This typically starts at $400 and goes up until $2,000 depending on the cat’s quality and the breeder. You can find Chausie rescue sites and breeder sites around the United States.